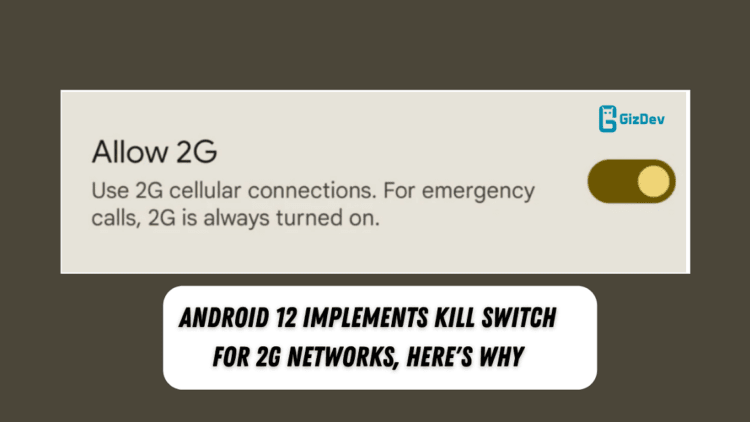 Android 12 comes with lots of new changes and features. One of the small features is killing off the 2G networks. There’s a killswitch available in the Android 12 to shut down searching of 2G networks by the handsets. You can now easily use the kill switch to turn off 2G networks on Android 12.

The electronic frontier foundation praised Google’s move to implement the switch. The EFF has been trying to kill 2G networks since 2020. Google’s move to provide a kill switch is appreciated by the same. But why do Google and other guys want to shut down the decade-old network standard? The one-word answer is security.

The reason for shutting the old dog is privacy and security. The aged cellular standard lacks security. Already the carriers in the USA have now started shutting down the 3G networks. But the smartphones we use now actively search for the 2G networks. Apart from that, there are some problems as stated by EFF,

“There are two main problems with 2G. First, it uses weak encryption between the tower and device that can be cracked in real-time by an attacker to intercept calls or text messages. In fact, the attacker can do this passively without ever transmitting a single packet.”

Also, as per the EFF in 2G networks, there is no authentication of the towers to the phone. “which means that anyone can seamlessly impersonate a real 2G tower and a phone using the 2G protocol will never be the wiser.” So turn off 2G connectivity, Android 12 users need to go to Settings > Network & Internet > SIMs > Allow 2G and toggle off the setting”. The EFF also advised Apple to do the same as Android.