[The Review] The Honor Band 5 Review (After A Week Usage) 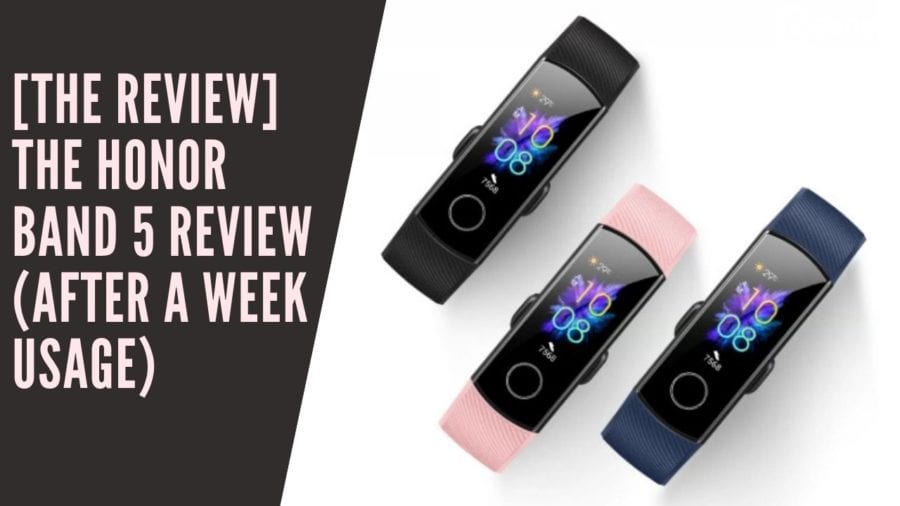 The Honor band 5 is the new upgrade to its Honor Band 4 which was launched a year ago. I bought the Honor band 5 in its first sale via Flipkart. We already did the simple unboxing video and I thought I should write a review after a week usage to get all things clear for me to have opinions on. So here is the full Honor Band 5 Review. I’ll write my opinions about this band so maybe you can’t agree on a specific point, let me know if something wrong.

The Honor band 5 comes with the same design as of the Honor Band 4. Colors available are Meteorite Black, Midnight Blue, and coral pink. The strap provided with the Band is the traditional one which we usually have in the ordinary watches. It is a plastic strap still it looks good and we can adjust it according to our requirement. Because of plastic strap elements, there are chances of breakage if used roughly.

The overall design looks great, I really didn’t like the Mi band design it was bulky. But this one looks great and doesn’t feel bulky at all. Looks like a regular watch with a more appealing design. A button is provided on the band which we can use to go to the home screen or turn on the band. The back menu transition we can use gestures.

Honor Band 5 has 0.95inch 240*120 resolution AMOLED display. The display is crisp and easily can be seen in the broad daylight. There is nothing to complain about the display here. The AMOLED panel works great it has 2.5D curved glass which really looks appealing. The display looks great we can adjust the brightness through the band settings for a more clearer view. A feature I liked the most is raising to wake the band, it’s very useful you don’t need to tap on the button to wake the band. Just raise your hand upside and the band will wake. You can turn on this setting from the Huawei Health App.

It has a six-axis accelerometer sensor which is accurate enough. But sometimes I noticed the error in counting steps, it counts the steps even which I am not walking or just sitting (sometimes). Apart from that the heart rate monitoring, sleep tracking is really accurate. It can track your sleep pattern how much time you were in deep sleep and how much time was half-awake in the sleep. The heart sensor accurate and shows good accuracy. You can track continues heart rate or for some seconds.

In the specification, there is an SPO2 sensor as per the Honor. But it’s disabled maybe they will make it available in future updates. That’s the new thing which was not available in Honor band 4.

There you can adjust the watch function which one is to set and enabling disabling heart rate and sleep tracking. Also, you can change watch faces withing the app no need to go to the settings of the band every time to change the watch faces. For the Honor Band 5 review, Overall the Huawei Health App does its job great.

The thing is there are only 8 default watch faces available as of now. But you can get more by using tricks. I’ll post the trick to get more watch faces. The vibration motors are good enough you will instantly know the messages or calls. There is charger provided in the box, the band 5 has 100mAh battery which lasted 4 days for me on a full charge. I was using continues sleep tracking. charging takes about 1 hour to charge the band 5 from 0-100. The Honor band 5 is available on Flipkart in India for 2599 INR.

Honor band 5 is the best budget fitness band available now. The competitor is MI band 4 which is having same features with less price. But according to some, there are accuracy issues on the MI band 4 and I personally didn’t like the design of Band 4. So if you want an accurate budget fitness tracker with all the essential features you should definitely go for Honor Band 5!!

So if you like the Honor band 5 review don’t forget to share it!! Also, comment if something I missed!! Follow us on our Facebook page for more instant updates and also join the telegram channel to get the tech updates and news directly on your smartphone.

How To Transfer WhatsApp Between Android And iPhone In Easy Way