How to Install Rooted Windows Subsystem for Android 13

by nitya
in Android, Downloads, Featured, How To, Windows 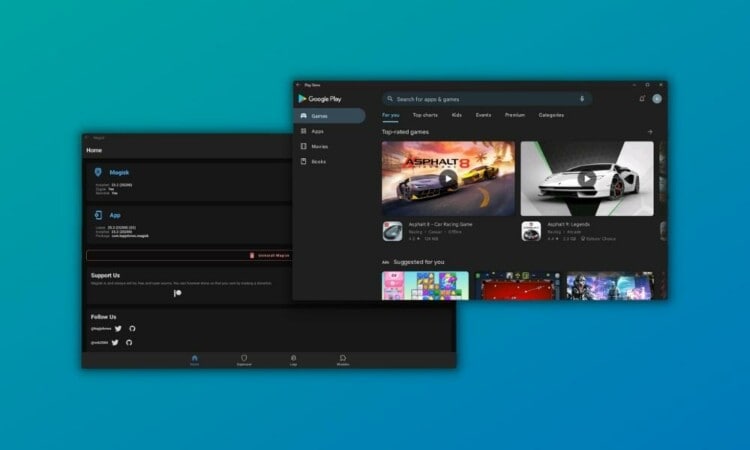 If you are an Android user you will really know that Magisk most popular tool that exploits to gain root access to the Android operating system. GitHub user successfully installed Magisk, Riru, and LSPosed on WSA with some patches. Some GitHub users also created a script that will build the latest Rooted Windows Subsystem for Android with Google Apps GApps.

What is the Windows Subsystem for Android and How does it Work?

Windows Subsystem for Android is a new feature in Windows 11 that allows you to run Android apps on your Windows PC. It’s an emulation layer that lets you run the same code that would run on an Android device, but with some tweaks and optimizations to make it work better on a PC. Keep in mind that this is an emulator, so it’s not exactly the same as running Android on your PC. It will use some hardware acceleration to speed up performance and is limited to a version of Android that’s compatible with 64-bit Windows 11. The Windows Subsystem for Android doesn’t have any limitations to what you can do with it, but it does have some compatibility issues that you should be aware of before installing apps.

Here are some limitations of the Windows Subsystem for Android: You cannot install Android apps that require a camera or microphone unless compatible with Windows Mobile devices. Some banking apps may not work with the Rooted Windows Subsystem as the safety net test is still not passed with magisk.

Here we have created the Latest build of Windows Subsystem for Android 13 WSA_2211 Build on 28 December from EricFengFuuuu / MagiskOnWSA GitHub page that is rooted with magisk and included with Pico Google Apps.

WSA Android 13 with magisk and GApps –

Here is the guide to build the latest Windows Subsystem for Android from the GitHub page using the EricFengFuuuu/MagiskOnWSA script.

2. At the top of the MagiskOnWSA GitHub page click star then fork.

4. Go to the Action tab in your forked repo.

5. Click I understand my workflow, go ahead and enable them.

7. Select the packages you want with your Windows Subsystem for Android13 (WSA) package then click Run Workflow.

8. Wait for a few minutes then download the complete package in the zip file.

That’s it now follow the installation guide to install WSA on Windows 11.

How to Install Windows Subsystem for Android on Windows 11

2. Create wsa folder in C Drive and Unzip the package zip on it.

3. Open the wsa folder and run Install.ps1 with PowerShell to start the installation process and follow the steps.

4. If the installation failed for some permission issues then run the Install.ps1 as Administrator from the CMD terminal.

5. Run CMD as Administrator and copy and paste the commands one by one first cd C:\wsa then PowerShell.exe -ExecutionPolicy Bypass -File .\Install.ps1 hit enter.

6. The installation process may ask for a reboot to disable virtual machine platform type y and enter to reboot then follow the process once more to finish the installation.

After the installation process is done log in with your google account to enjoy Android Apps on your Windows PC.