by akash
in Android, Themes 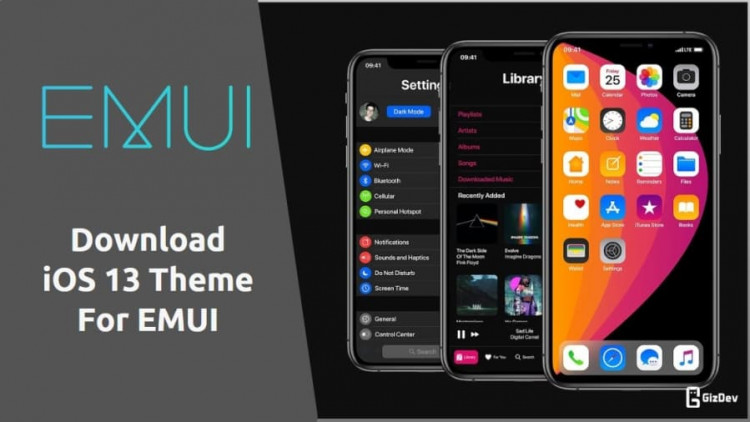 Today we got iOS 13 Theme For EMUI devices. Finally, Apple launched iOS 13 on the 3rd of June in the Worldwide Developers Conference (WWDC). Like every time, iOS 13 brings lots of new features with more optimization. iOS 13 makes your smartphones beautiful and elegant. Below we share some of the features about iOS 13. If you want to see all the features then open the Apple official site. If you want to get this theme on your device then you are the right place. Today we extracted iOS 13 Theme for Huawei and Honor devices. Let’s check some iOS 13 features.

iOS 13 brings faster and efficient performance than before. Now you can install apps and open application faster. Also, app download sizes are up to 50% smaller than iOS 12 and it brings 30% faster Face ID recognize feature. This time Apple introduces Dark Mode, Advanced Photo and Camera Features and more.

After a long waiting Apple at last introducing system dark mode with iOS 13. The systemwide Dark Mode changes the entire look of the OS from the light to dark themes. This feature automatically changes at sunset. Also, all iOS stock apps support the dark theme.

Apple photos almost providing the same features as Google Photos. Now it automatically makes your moment videos. Also separate your all photos as a selection from face recognize, day, year and place. Photo app further brings the latest Photo editing feature, you can use it to edit your photos easier. This editor tool mainly uses for edit videos. It allowing you to rotate, crop, and apply filters to videos. There is also a new portrait lighting feature in the camera app that lets you add more light to your portrait and make your skin smoother. Also now you can Play live photos and videos while scrolling.

A new privacy feature called “Sign in to Apple” can log you into your account and apps without having to add your email address, which Apple says will protect users from third-party app tracking.

There are also many more features, If you want to know then browse: https://www.apple.com/in/ios/ios-13-preview/

Huawei user wants new themes for their device so here we publish new themes. You can use this theme on any Huawei and Honor devices. I used it on my Huawei device, I personally recommend trying this theme on your device it’s too good. This theme supported on EMUI 5, EMUI 8 and EMUI 9 or above. Let’s check some iOS 13 features.

Huawei user wants new themes for their device, so here we publish brand new theme. You can use this theme on EMUI 5, EMUI 8 and EMUI 9 devices. The iOS 13 themes are absolutely beautiful. Below are listed iOS 13 themes for EMUI devices. For a full guide with image check out How to install EMUI Themes On EMUI 8 or EMUI 5.0 below