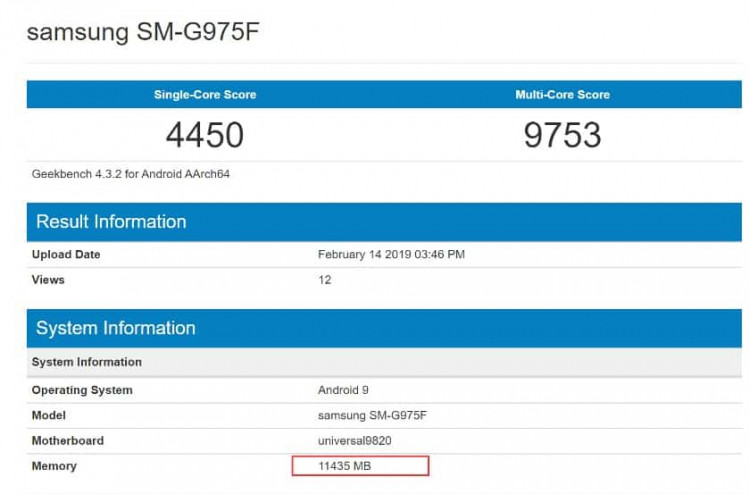 On February 15th, Samsung Galaxy S10 Plus appeared on GeekBench’s website. The page shows that the device is equipped with 12GB of RAM and it runs on Android v9.0 system. The single-core score is 4450 and the multi-core score is 9753. This phone is powered by a non-removable battery capacity of 4100mAh.

You may also read:-

According to previously disclosed information, the Samsung Galaxy S10 +12GB RAM version will provide 1TB of internal storage, which is the world’s first 12GB + 1TB flagship.

The world’s first Samsung Galaxy S10 Plus top version coming with 12G memory + 1T storage. It is reported that the Samsung Galaxy S10+ uses a boring screen solution with a screen size of 6.3 inches, at a screen resolution of 3040×1440 pixels, and a screen aspect ratio of 19:9.

In summary, the Galaxy S10+ is by far the most powerful Samsung flagship, with ultrasonic screen fingerprints, a new full-screen form, a super three-camera, and powerful performance (Exynos 9820+12GB RAM+ 1TB storage) are currently in the Android camp.

It is worth noting that this release will also launch Samsung Galaxy S10, Galaxy S10E, and other models. Samsung will be officially releasing the device at 3 am on February 21, Beijing time.