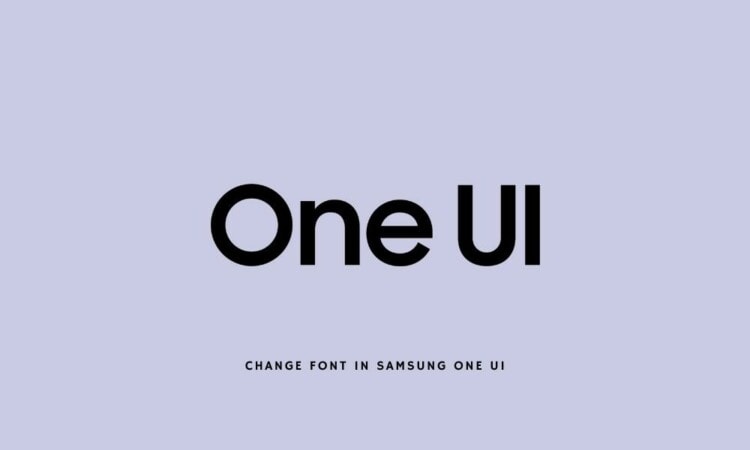 Samsung just launched the new One UI 5.0 for Galaxy S22 and beta testing for old devices like Galaxy S21. Samsung One UI is one of the best Android Ui that is currently running on Samsung flagship devices. But One UI has fewer customization options like less number of fonts, and you have to pay for premium fonts. Currently, to change the font in Samsung One UI officially you have to visit Galaxy Store App there are only a few free fonts available. But here are the unofficial methods with these methods you can change the font in Samsung One UI and you can use any font .ttf on your Samsung device.

If you are an Android enthusiast, most probably always customize your new device once you got in your hand. Like me, I always change launchers, themes, and widget fonts and I always publish Android customization on our blog. Samsung phones are strictly forbidden to change font officially in Samsung One UI. But thanks to xda developers members sathishtony and zFont who created mono app zFont for zFont 3 app this app will trick Samsung setting app and will change font in Samsung One UI 5.0 and One Ui 4.1, One UI 4.0 and old One Ui versions for you.

About Samsung One UI

The Samsung One UI update is the company’s latest attempt to provide a user-friendly interface. The new design is more intuitive, with more space for content and better readability. The Samsung One UI introduces a new design language and a cleaner layout, with new features such as an improved search function, which makes it easier to find what you are looking for. Samsung One UI is an interface design update by Samsung Electronics which was launched on June 25, 2018.

Download the Samsung font changing apps and fonts for Samsung

In this article, we will share two methods one via mono_ FlipFont and another via zFont 3 app, and also shared some fonts in this download section for your Samsung device.

2. Allow the app installation by toggle Allow from this source and follow the next steps.

3. Now open the app and follow all the steps provided by the app first sing-in in with your samsung account if you already then just go to the second step.

4. Then click install Samsung Sans and install the app.

5. Next change the font to Samsung Sans font.

6. Now back up the Setting to Samsung Cloud, if the backup option not showing on your religion then use the Activity Launcher app and search backup.

7. Deselect all and only select Setting app for backup and click backup and tap done then back to the app.

8. Now download any custom font from the download section .ttf file and copy it to phone storage monofonts/ttf folder.

9. Scroll down and Tap on load TTF file and select the .ttf file.

10. Now go to the second option Install Custom Font Tap Install this will Uninstall the old Samsung Font app and next will install the modified Samsung Font App just tap uninstall and then install.

11. In the third option Select Default tap on select and select the default font.

12. And at the last Fourth option tap on Restore Deselect all and only select Setting and then tap Restore.

That’s it you can see the new font after restoration.

1. First Download and install zFont 3 App from the Download section Open the app and grant all permission.

2. Now GO to dashboard then Monotype fonts and look for CircaleRounded font or download and install it from here.

3. After the installation tap on change font and select CircaleRounded.

4. Once you applied the new font, now go to Settings - Account and Backup - Backup Data Deselect all and only select Setting app for backup and click backup and tap done then back to the app.

5. Now after Completing the backup change the font to default From Settings - Display - Font Size and Style.

6. Open the zFont 3 APP Go to Local Tap on Green Aa Button and browse the Ttf file from the file manager then tap apply.

7. Select One Ui ALL# Option Scroll Down and tap on Install(fontname)zfont This will uninstall the old CircaleRounded font Tap once again to install the new font.

8. Once you installed the new font, now go to Settings - Account and Backup - Restore Data Deselect all and only select Setting app for and tap Restore then back to the app.

That’s it you can see the new font after restoration.